The 7th Beijing International Art Biennale, China 2017 co-sponsored by China Federation of Literary and Art Circles, Beijing Municipal Government and China Artists Association with the theme of “The Silk Road and World Civilizations”will be held at the National Art Museum of China on September 24th. This year also marks the 15th anniversary of Beijing Biennale. Initiated in 2003, the Beijing Biennale has successfully held six sessions and the number of participating countries has increased from 45 in the first session to 102 in the seventh one. There are altogether more than 4000 artists from different countries participated in the exhibition and millions of audiences visited the exhibition.

A New Chapter of the Maritime Silk Road

Through the combination of historical and realistic themes, the artist ingeniously places the ancient and modern maritime Silk Roads into the same time and space. Starting from the Quanzhou Port in China, the ships pass along the Shanghai Port to Nara, Japan, to Marina Bay Sands, Singapore, to Brunei, to the Palace of Malaysia… showing the prosperity of the shipping from the East to the West and the exchange and development of Chinese civilization and world civilizations. The picture is divided into three parts: Asia, Europe and Africa. The Indonesian Houses of Parliament is prominent in the picture while the flourishing Gwadar Port in Pakistan and the Convoy of Chinese Navy in the Gulf of Aden are especially emphasized. The artist adopts the unique artistic language of contemporary heavycolor gongbi painting, fully demonstrating the new chapter of the Maritime Silk Road in the 21st Century.

The New Chapter of the Silk Road

As a large-scale themed painting for this year’s Beijing Biennale, it presents a panoramic view of the new chapter of the ancient Silk Road under the leading of the Belt and Road Initiative advocated by the Chinese government in the 21st century. The distant view presents human geography and natural landscapes, which starts at the Big Wild Goose Pagoda in Xi’an, China, all the way across the river, Gobi, snow mountain, desert, grassland until the sea. The route passes though Mongolia, Kazakhstan, Bangladesh, Pakistan, India, the United Arab Emirates and Turkey, and finally arrives in Rotterdam, Holland, while the whole line is dotted with the symbol of high-speed railway. The middle view presents as fully as possible the major elements of projects along the "Belt and Road", showing in turn the Jiuquan Satellite Launch Center, "bullet" train, Kanas Thermal Power Plant, Kashgar Western and Central Asian Bazaar for International Trade, Asian Infrastructure Investment Bank, OECD, Pakistan Transnational Highway, starting point of the Eurasian Continental Bridge, Gwadar Port in Pakistan, Vietnam dam built by China and other important facilities. The China-Europe Train links the close view, including infrastructure workers, University of Nazarbayev, Kazakhstan, Confucius Institute, border trade transportation, peacekeeping force, Chinese medical team in Africa and so on. 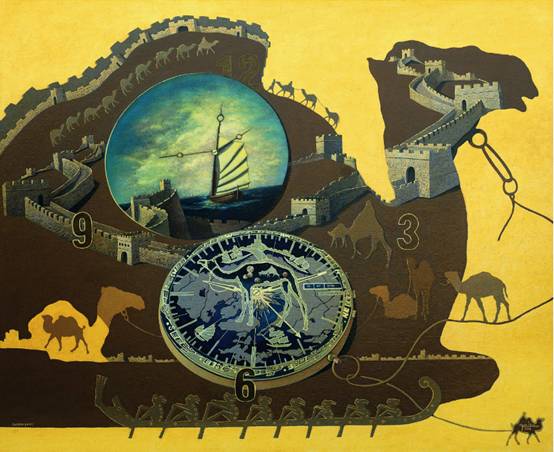 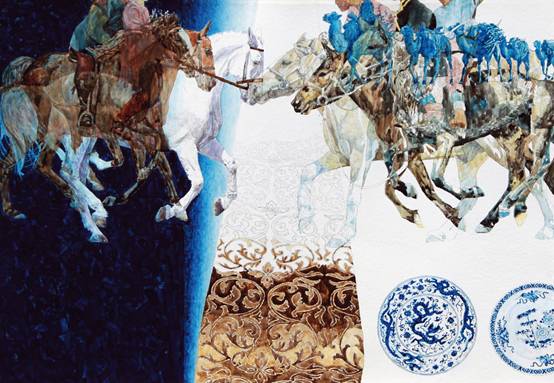 Silk Road—Riders from the East and the West 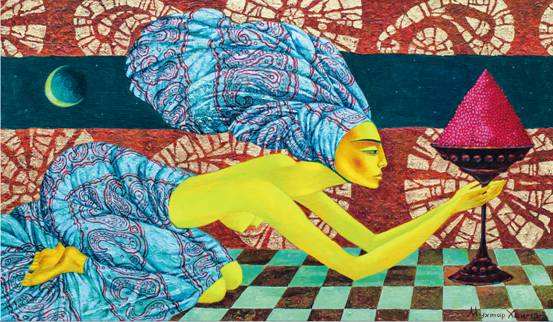 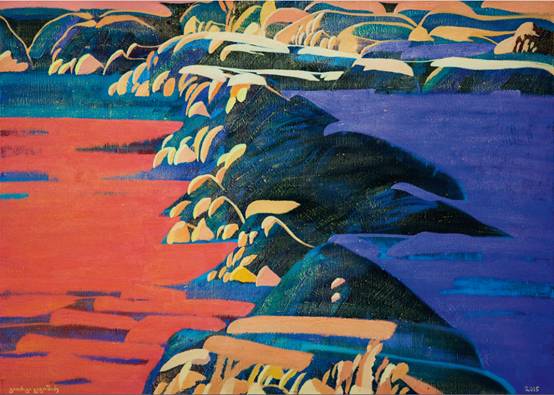 (From the Special Exhibition of Contemporary Art of Georgia) 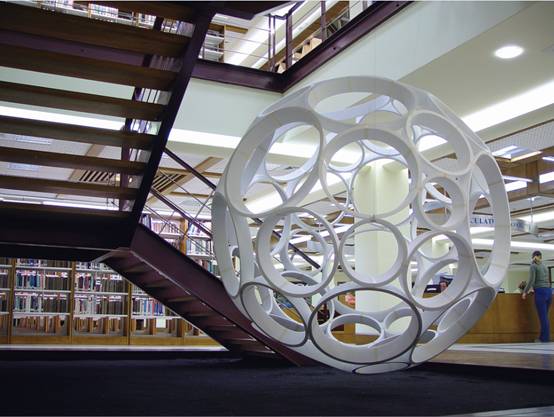 (From the Special Exhibition of Contemporary Art of Greece) 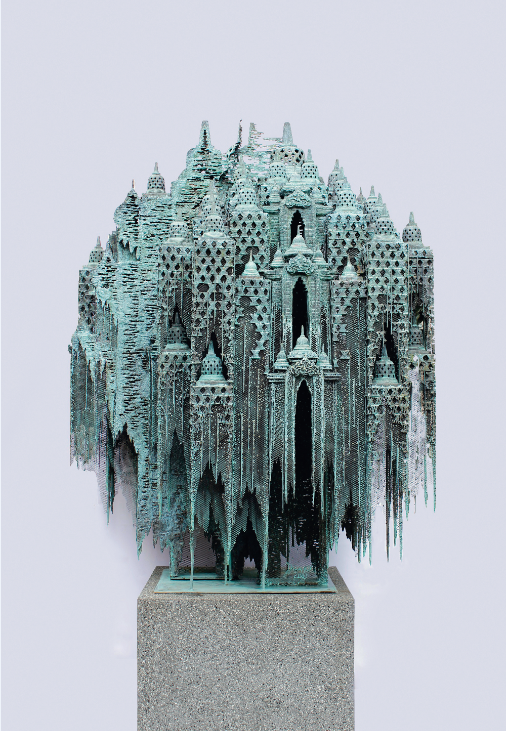 (From the Special Exhibition of Contemporary Art of Indonesia) 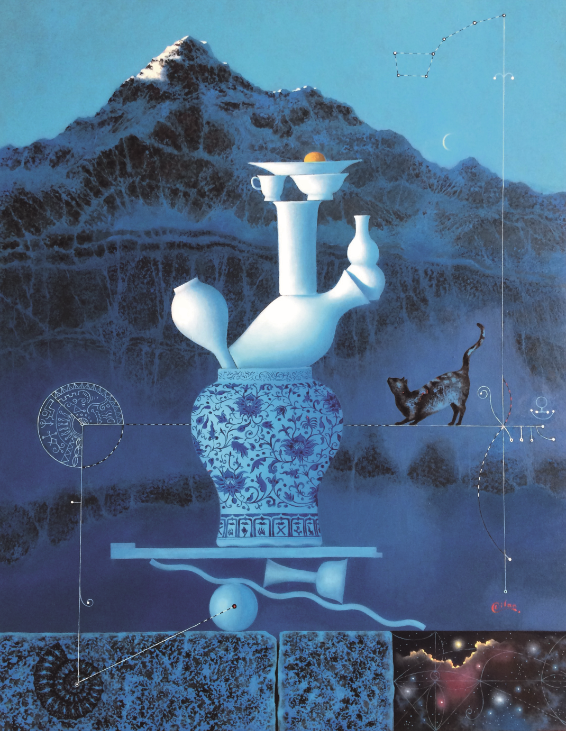 The Secret of Blue

(From the Special Exhibition of Contemporary Art of Mongolia) 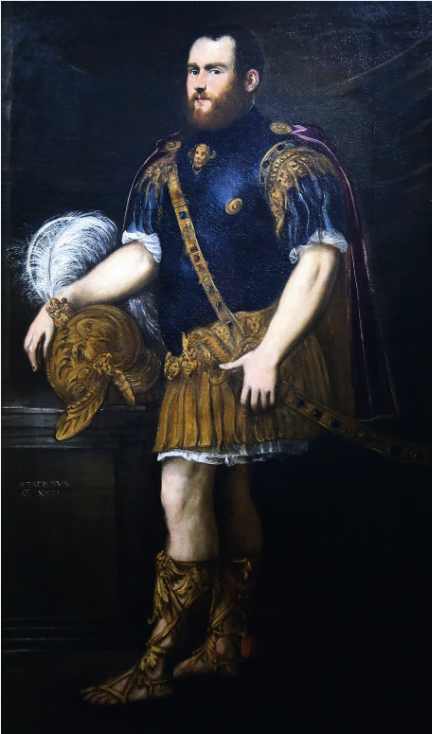 (From “The Tour of Art from Tintoretto to Lilanga”) 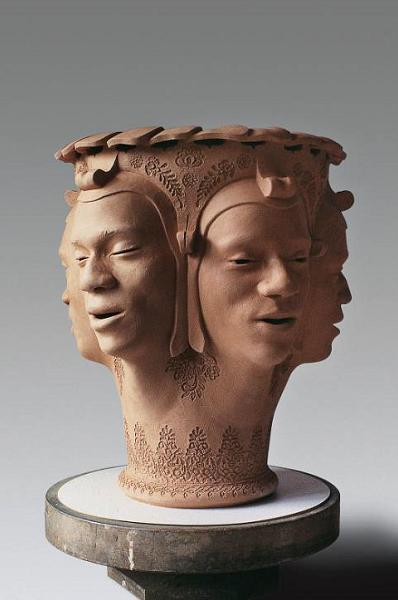 (From the Special Exhibition of Donated Artworks from Previous Beijing Biennales)